Bríd is an Irish traditional fiddle player from Castlefinn, Co. Donegal and now living near Dungannon, Co. Tyrone. Encouraged by her parents she grew up learning and playing Irish traditional music with her sisters in the Finn Valley area. With music on both sides of the family she is carrying on the tradition of fiddle playing. She won numerous under-age All Ireland titles and other prestigious fiddle awards including the Senior All Ireland, Oireachtas na Gaeilge and Fiddler of Dooney.

Bríd an MA graduate of the Irish World Academy of Music & Dance at University of Limerick has toured extensively and has performed with many great musicians including Dermot Byrne Steve Cooney Donogh Hennessy Danny O’Mahony Arty McGlynn Harry Bradley Tony O’Connell and Cyril O’Donoghue. She has been hailed as one of the leading exponents of traditional fiddle playing of our time. Bríd is highly respected as a teacher and has tutored at many Summer Schools and Workshops throughout Ireland and in France, Holland and the USA. Her first solo CD was released in 2015 and has enjoyed much success to date.

Tony O’Connell is from Glin in West Limerick but now lives in Co. Kerry. He began playing music at the age of ten and won the All-Ireland concertina title under 18 for three consecutive years.

He has recorded three duet albums. ‘Live and Well’ is his first solo recording and listeners will realize why Tony is acknowledged as one of today’s finest exponents of traditional concertina playing. 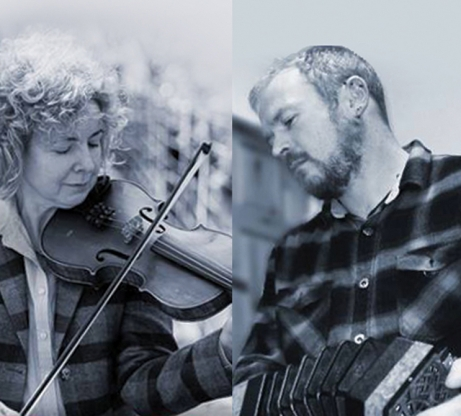